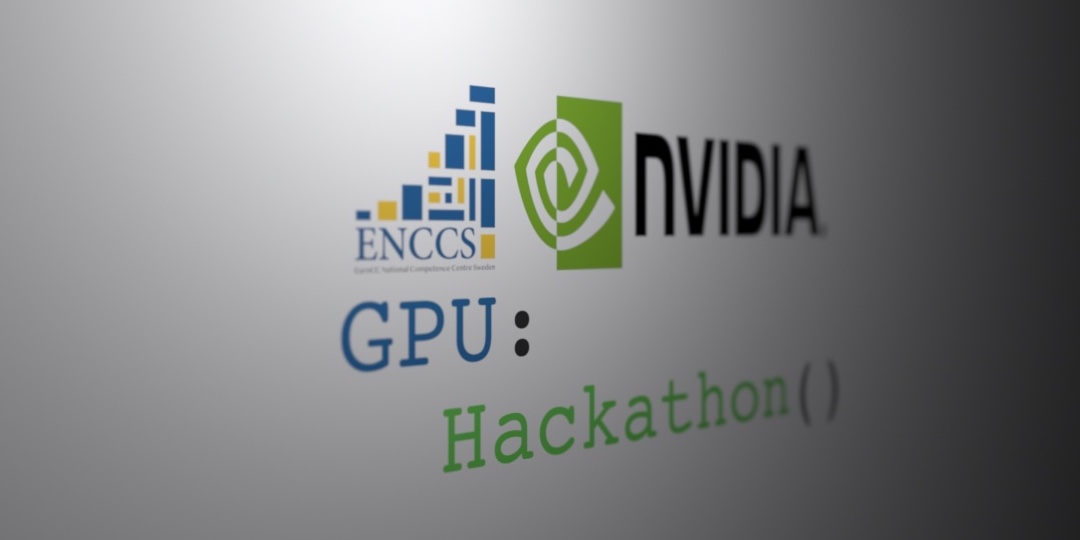 The four days long GPU hackathon organized by ENCCS together with Nvidia and with the help of NSC at Linköping received a lot of positive feedback from the participating Swedish research groups.

The GPU Hackathon provided exciting opportunities for scientists to accelerate their AI research or HPC codes under the guidance of expert mentors from NVIDIA and ENCCS. Teams of researchers were paired with experienced GPU mentors to learn and apply the accelerated and parallel computing skills needed to leverage the computing power of GPUs for their scientific applications. The hackathon featured software from academia as well as from the public sector. These codes are developed in-house by the various teams and all are permissively licensed. These projects were assisted to:

Use OpenACC or CUDA to gradually offload work to GPUs and incrementally improve the performance, identifying expensive kernels and porting them to CUDA profile already GPU accelerated applications to find hotspots for further acceleration.

The event was supported by WASP and NSC through the access to BerzeLiUs system.

The first day of the event consisted of presentations from mentors, organizers, and from participating groups. The day continued with further interactions between mentors and groups to identify the wishes and needs of the participants for their code improvements. The following three days were dedicated to intensive hands-on work on the improvements with the help of mentors. Each day was concluded with short presentations of the progress of the day.

One of the participating teams, called TurboBrains, with team Members Naresh Balaji and Anders Lansner, was from the Computational Brain Science Lab at KTH Royal Institute of Technology, Sweden. Their code called BCPNNSim, an open-source code for scalable parallel simulation of Bayesian Confidence Propagation Neural Networks was used at the hackathon where help was needed to focus on optimising complex networks in the code while keeping the same basic module as well as implement some profiling. The group was assisted by Matthias Noack from Nvidia and Jing Gong and Artem Zhmurov from ENCCS.

“The hackathon was very useful for us in profiling, optimizing, and extending the functionality of BCPNNSim.” says  Naresh Balaji. “We managed to gain a 2x speedup compared to our initial GPU OpenACC code and 137x estimated speedup compared to our (O3 optimized) serial implementation. We currently use the GPU code developed in the hackathon for carrying out research experiments and in our scientific publications.” he adds.

One of the other participating teams,  team Dockarna, with team members Joakim Gåfvels from Trafikverket AB, André Winberg, from Trafikverket AB and CGI AB, and Kalle Prorok, Umeå university. The team was assisted by Xianchao WU from Nvidia and Hossein Ehteshami from ENCCS. Their AI project was about using the KB-Bert software developed by the Sweden National Library (KB), to run Q&A and classification on Trafikverket AB’s documents and improve the process. This AI solution in its turn would help in:

“Hackathon gave us an opportunity to focus and work on using AI/ML for our own business during an intense period. It also taught us the importance of having/collecting useful and organized data and thinking about legal aspects regarding usage of data and models as well.” Says Kalle Prorok